How many times have you heard that the Bible is supposed to be a perfect book? This statement is accepted without question by many Bible believers, but it is easily disproven by looking closely at some of the Bible's many mathematical claims.

You don't have to be a mathematician to understand these errors. They are clear and obvious to anyone who can add, subtract, multiply and divide.

Scroll down for a brief description of the math errors in this book.

•  Click here to view sample pages from this book.

•  Click here to view readers' questions about this book, and our answers.

This book discusses in detail the following Bible Math Mistakes:

Jesus' Math Mistakes
Jesus was wrong about his own resurrection
Jesus was wrong again about his own resurrection
Will the 2,000 year old guy please show himself?
1 body - (1 hand + 1 foot + 1 eye + 1 private part) = salvation
Jesus, the devil and a flat earth
Not all that take the sword shall perish with the sword
How many times, and when, did the cock crow?
Jesus will be short one judge on the judgement day
1 does not equal many
0 temptations does not equal many temptations
Over 100 gallons of tasty temptation to sin
1 praying little old lady * 2 = no need for hospitals
1 Holy Spirit -> thousands of Christian theological disputes
Biostatistics vs Jesus
1 Golden Rule, 4 divine hypocrisies
Jesus commanded us to be 490 times more forgiving than God
Believers' works are not > Jesus' works
Another "greater than" goof
Jesus' dietary dilemma #1
Jesus' dietary dilemma #2
Jesus vs hundreds of thousands of copying errors
Jesus was short by at least 4 prophets

Math Mistakes About Jesus
Matthew's "prophecy" is wrong by over 700 years
Matthew's dirty little secret about Jesus' ancestors
Dating the first Christmas ("Christ Mass") is a mess
Prophecy: out of context, 570 years late, proving that God is immoral
Zero, three or "all" temptations for Jesus
30 or 17 pieces of silver and the wrong prophet
One or two blind men?
Philip and Isaiah got it wrong 15 times -> an evolving myth
Many resurrections or zero resurrections?
Zero roommates in Jesus' grave?
More resurrected math errors
Did 10 or 11 apostles wee Jesus on Easter? More evolution of the resurrection myth
When did the woman pour the ointment over Jesus?
What time of day was Jesus crucified?
One or two angels?

"Historical" Math Mistakes
Moses' ghost writer's 450-year oops
God sadistically killed trillions of animals for no reason
Gld plans to kill trillions more animals for no reason
The birth of Isaac and the Genesis chronology
Were the Israelites in Egypt 255, 350 or 430 years?
Trillions of quail bones mysteriously missing
God ordered > 3,000,000 violations of "Thou Shalt Not Murder"
How many items were kept in the Ark of the Covenant?
The Amorites just wouldn't die
Midian makes a miraculous recovery
God "Takes care of" > 30,000 widows and orphans
Over a thousand sacrifices every day, but only one altar
How many cities were given to Judah?
How many cities were in the valley?
How many Israelite tribes were there?
Was Moses active or debilitated when he was 120 years old?
How many sons did Jesse have?
How big was David's army?
How do you prevent a plague or cause one? Take a census!
How many years between leaving Egypt and building the temple?
How many tribes remained loyal to Solomon's descendants?
Baasha fought a battle 9 years after he and his family died
How many Jews did Nebuchadnezzar/Nebuchadrezzar deport?
Victory or defeat? It depends...
20,000 divine chariots vs 2-horsepower wheeled washtubs
Two really old brick layers
How many vessels did Cyrus give to the temple?
Bad accounting
How many Jews returned from the Babylonian captivity?

Sexual Math Mistakes
Most prolific human procreation in history
Profuse, open, sexual sin every day while writing the Bible
The Bible says that women are worth less than men
"1 flesh" can get pretty kinky
Benjamin, the child who was a grandfather
Inescapable adulteries > 0
How many sons did Abraham have?

Theological Math Mistakes
Which Ten Commandments are the "real" ones?
Inescapable sins > 0
How many times do you get to die?
How many righteous people have ever lived?
God punished the wrong people, hundreds of years late
God punished the wrong people again, 40 years late
An "Inspired" book of the Bible that has no "inspirer"?
Deals with the devil
God lied and lied and lied
More lies
All is not all
Not is not not
Forever is not forever

Scientific And Geometrical Math Mistakes
Why can we see stars that are more than 10,000 light years away?
Only three guys noticed a low-flying star
More misplaced stars
Did God create man or animals first?
Wrong by hundreds of miles per second
The earth hangs, or it sits on pillars, or on heaping seas
Stationary sun and moon
Why did Satan attack church steeples and belfries?
If I ever have heart surgery, please do not pray for me
Longevity and Christianity
Pi and the "Molten Sea" in the Jerusalem temple
How tall were the pillars in front of the Jerusalem temple?
How tall were the chapiters on the Jerusalem temple? 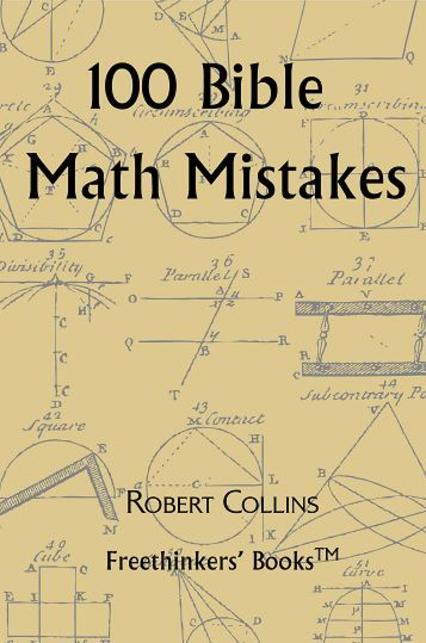