When will Christians become a minority in the United States?

Many large, statistically valid surveys have documented the decline of Christianity in the United States. This is a long-term decline, not just a statistical fluke.
In fact, white Christians are already a minority in the United States.
But if you add in other races, you find that at the present time, in 2018, about 70% of Americans identify themselves as Christians.
Since the trend away from Christianity is supported by large amounts of data, it is possible to estimate when less than half of the people in the United States will identify themselves as Christians. Before I start talking about numbers, though, it is important to understand the risks of these kinds of predictions.
These risks include uncertainties in the surveys themselves, immigration, birth rates and even politics, because the U.S. government subsidizes Christian groups with tax breaks and cash payments through faith based initiatives, abstinence only sex education and many other programs. In addition, there are unknown risks. We don’t even know what we don’t know about these risks.
That having been said, let’s take a look at the data. The largest survey with the most data, over time, is the Gallup survey, which has surveyed thousands of Americans each year since 1948.
I plugged only the data for the Christians and the nones into a Microsoft Excel spreadsheet, and here is the result. I’ll put a link to the data in the description of this video, in case you want to look at it yourself. Very clearly, there is a downward trend in Christians and an upward trend in nones. Excel has a linear regression function, which draws a trendline.
Here’s the same data with a trendline, which was calculated by Excel. The R squared values tell us how accurately our trendline explains variations in the data over time. The best R squared that you can get is a 1, so 0.86 and 0.87 are quite good for data that involves human behavior.
Notice also that Excel gives us an equation. That is the equation of the trendline, and can be used to mathematically project this trendline into the future.
This graph projects this trendline into the early 22nd century, the year 2120. As you can see, the Christian prediction crosses the 50 percent line between the years 2100 and 2120. That’s a long time to wait. But, if the trend over last 70 years is a reliable guide to the future, then that’s what the numbers say.
But let’s take another look at our original graph.
Notice that the rate of decline is increasing for the Christians, and the rate of growth is increasing for the nones.
Maybe something has happened in the past 20 years that has caused these trends to progress at faster rates.
When we calculate these trendlines, we get more dramatic results. Notice that the R squared values have actually increased, which suggests that maybe we are on the right track. The Christian trendline declines below the 50 percent level in the mid 2040’s, and nones start to outnumber Christians in the 2050’s.
This gives us an awfully wide range of predictions. One set of data suggests that Christians will stay in the majority for almost another 100 years. A subset of that data, containing data for only the most recent 20 years, projects that Christians will become a minority within less than thirty years from today, in 2018. Is there some kind of historical precedent that might help us decide which one is closer to correct?
I would suggest that there is such a precedent. In the mid-1400’s, the printing press was invented. This dramatic improvement in information technology was a major factor in breaking the power of the Catholic church during the Protestant Reformation.
We have seen another dramatic improvement in information technology in the past 20 years – the development of the internet.
This coincides very neatly with the change in the trend.
Why is Christianity declining? There has been a lot of controversy about this. Here is my opinion. First, vastly improved information technology has made it much easier to investigate Christianity’s claims, most of which are demonstrably false. This new technology has also made it more difficult for Christianity to silence its victims and hide the corruption and hypocrisy of Christian leaders. Next, improved technology for transportation and communication, has helped many people to have friends who are not Christians. One of the best arguments against Christianity is discovering that your non-Christian friend(s) are just as good people as Christians, sometimes better.
Of course, there are probably some other factors, including multiculturalism, archaeological discoveries, scientific research, better education, and many others. All of these factors work together, and it’s bad news for Christianity.
We see that there is a historical precedent and at least one plausible explanation, maybe more, for why a steeper decline may be a more reliable predictor of  future trends.
So, when will Christians become a minority in the United States? Frankly, your guess is as good as mine. But now maybe we both have some data that will help us make a better guess.
By the way, the data that I used for these graphs is copyrighted by the Gallup organization and is used here in compliance with the “Fair Use” legal doctrine. The graphs and calculations are mine and have not been reviewed nor endorsed by Gallup or anyone else.
Thank you for watching our video. For more interesting information about Christianity, please visit our web site, Freethinkers Books Dot com. If you liked our video, please click the YouTube Like icon, subscribe to our YouTube channel and share our video with your friends. Thanks again. 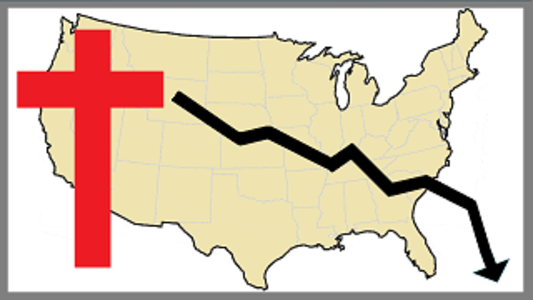 When Will Christians Become A Minority In The USA?

I plugged 70 years of survey data into a MS-Excel spreadsheet and used its linear regression function to forecast when less than 50% of the people living in the USA would identify themselves as Christians. I also did similar forecasts for "nones" (people with no religious affiliation). I did two forecasts, one using the whole 70 years of data, and another using only the most recent 20 years. This video discusses my calculations and graphs, together with some plausible explanations for the causes of these trends.

The data that I used in this video is copyrighted by the Gallup organization and is used here in compliance with the “Fair Use” legal doctrine, because this video uses only my own graphs, which I have created, and summarize and extrapolate the data in ways that have not been presented by anyone else.

The graphs and calculations are mine and have not been reviewed nor endorsed by Gallup or anyone else. Gallup®  is a registered trademark of Gallup, Inc.

Link to the Gallup data used in this video:
http://news.gallup.com/poll/1690/religion.aspx