This video examines the historical evidence for both of these locations, and demonstrates that neither location is likely to be the tomb of Christ.

Information about Christ's tomb is strangely absent from early church history and the writings of early Christian historians and theologians. In fact, outside of the Bible, there is no evidence that anyone ever knew where Christ's tomb was. And even the Bible itself gives us good reasons to doubt that any of its writers knew the location of the miracle which is the basis for all Christian belief.

This historical silence, about such an important event,  raises some disturbing questions about the Resurrection itself.

Most Protestant and Mormon scholars believe that Christ was buried at a place that they now call The Garden Tomb. 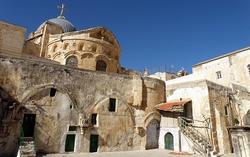 ​If Jesus Christ’s resurrection is true, why does he have two tombs?

If Jesus Christ's Resurrection Is True, Why Does He Have Two Tombs?

But Catholic and Orthodox scholars believe that Christ was buried at the location of the Church of the Holy Sepulcher, which has been revered by Christians for almost 1,700 years.

Where did Jesus Christ's resurrection happen? Even though the resurrection was the most important event in the history of the Universe, scholars disagree about where it happened, i.e., the location of Christ's tomb.