Please email your comments/questions to freethinkersbooks@gmail.com

This 1-minute video describes 3 Bible self-contradictions in 2 Samuel 24 and 1 Chronicles 21.
1. The Bible can't tell the difference between God and Satan
2. God killed thousands of Israelites, as punishment for something that was not a sin
3. God violated his own law by killing the wrong person 70,000 times 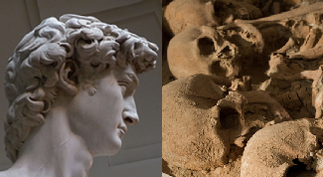 Excellent question. The most reliable way to answer this question is to look up these verses in several different Bible translations. I did so with 23 different English translations. Here's what I found:

God's own law prohibited killing a son (or daughter, presumably) because of the sins of his/her parents.

Despite these prohibitions, it is actually quite common for the Bible to claim that the Jewish/Christian god killed people because of someone else's sins.

[2] At the first Passover, God killed thousands (maybe hundreds of thousands) of Egyptian first born, even though Pharaoh was the one who would not allow the Israelites to leave. I've created a video about this. Click here for more info.

[3] God killed innocent children and babies because of the sins of their parents in Noah's flood (Genesis 7), the destruction of Sodom and Gomorrah (Genesis 19) and the Hebrews genocidal conquest of Canaan (Deuteronomy 20:16-18, the first few chapters of Joshua)

[4] God killed the Hebrew children because of the sins of their parents during the siege of Jerusalem around 600 BCE. I've created a video about this. Click here for more info. [[]]

Question #1:
On November 22, 2018, Jane4Jesus asked
Is this the only example of God punishing the wrong people in the Bible?